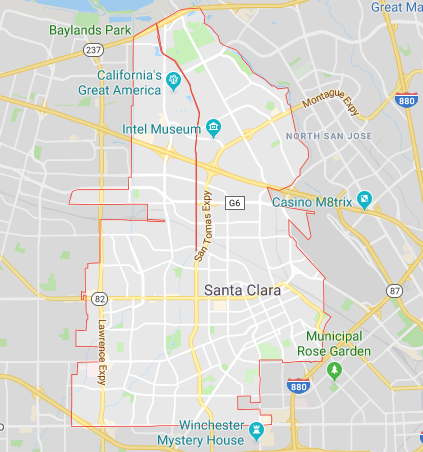 Our top garage door services include:

Santa Clara is a city that is located in the center of Silicon Valley. The city itself is located in Santa Clara County, California and has an estimated population of 125,00 residents. This puts the city in the top ten most populous cities in the San Francisco Bay area. The city was originally founded in 1777 with the development of the Mission Santa Clara de Asis, one of 21 California missions. The city was officially incorporated 75 years later in 1852. The city, county, and mission were all named after Saint Clare of Assisi.

The city represents a significant historical location in the San Francisco Bay area region. It was first visited in 1769 by José Francisco Ortega. By 1851 Santa Clara College was established around the original Mission location and the city became state-chartered by 1862. The 1960s saw the birth of the semiconductor industry that changed the area forever.

Santa Clara is considered to be a central location of Silicon Valley and is home to the headquarters for large companies including Intel, Applied Materials, Avaya Inc., EMC Corporation, ON Semiconductor, Lsa Global, and more. These companies provide massive economic influence in the area and around the country.

There are a number of points of interest that are vital to the residents and tourists of Santa Clara. These locations include California’s Great America, the Santa Clara Convention Center, the Mission City Center for Performing Arts, and Levi’s stadium, home of the National Football League’s San Francisco 49ers.

Pictures will be posted soon for projects in Santa Clara!